From Camphill to the Military to Rhode Island School of Design

Julius Cavira volunteered with Camphill Communities California almost two decades ago. This spring, he requested a Camphill California patch to sew onto his robes for his art school graduation. The community was happy to oblige; we were curious: What inspired the request?

A lifelong artist and self-proclaimed “street kid”, Julius was raised on the Northside of Chicago in the early 90s. Growing up, he took free art classes at the School of the Art Institute of Chicago where he later earned his Bachelor’s of Fine Arts. A year later, Julius enrolled in a service year through Americorps at Camphill Communities California before enlisting and serving two tours in Iraq as a United States soldier. He enlisted as an army chef, because “If I’ve got to be anywhere in the warzone, at least I know where the food and water is.” At RISD, Julius received the prestigious St. Boltoph Emerging Artist Award in sculpture.

It’s quite clear that Julius has led an interesting and service-driven life of challenge, perseverance, and learning, but he insists that “Camphill made me responsible enough to walk across that [graduation] stage. It made me strong enough and confident enough to know that I’m becoming an adult.” Julius will be returning to RISD in the fall to complete a second Masters, this one in teaching.


Julius is sincere about the valuable role Camphill played in his life: it was a Camphill patch rather than a military badge that he wanted to be sewn to his robes. Both experiences are a part of his storied journey, but the Camphill patch reminded him that he is “standing on the shoulders of the people before him. The mentors, the friends, everyone.” Julius paused and thought more about why he had asked for the patch, then chuckled and said, “I wanted to show, like a walking advertisement, and say, ‘hey we need people.’ We need Americans helping Americans.”

The Intersection of Fine Art, Camphill, and The Military

Although they represent near opposites in ideology and practice, Julius draws insightful comparisons between his time volunteering with Camphill and serving in the military. Both positions require an awareness that extends beyond the self, each person has something to contribute and each person is relied on to follow through with their commitments. As Julius puts it, “strength of community is essential.” If the Camphill experience was only easy and did not require determination and emotional fortitude, Julius would not have sewn his patch onto his robe. The challenges of time management, commitment, and patience made his experience so rewarding and impactful all these years later. “It’s what you do that matters. Man, I was coming from Chicago, I was a street kid. And here I am saying wow, this guy needs me. He has Down syndrome and he needs my help.” For all of us, fulfillment does not come from coasting through life and avoiding experiences that force us to grow and learn. That is what Camphill provided Julius at a pivotal time in his young adulthood. Camphill was so unique; it challenged all his preconceptions about disability and showed him that “freedom of self-expression is everything.”

Upon returning from Iraq, where he was honorably discharged, Julius re-immersed himself in art and began translating his experience with the military, religion, and identity into potent and poignant forms.

“It was a tent made out of canvas. Now we can reinterpret this as the actual wooden confessional in church, but I made it into a tent to represent the military. I could have done this as a painting of a tent with a kind of surreal atmosphere of a tent dead center of the canvas in the middle of a desert, where the idea would have been ‘searching for advice,’ but I settled on building it out as a functioning piece.”

Art from Julius Over the Years

To Julius, this piece toys with the question of someone “playing god to pass judgment and purge others while leaving the rest unharmed.” It is a close-up of Osama Bin Laden’s gaze, which is meant to “be telling of the soul.” Who are you to decide who lives and dies? 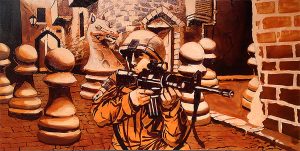 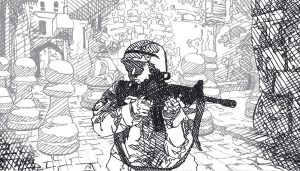 “In jungle warfare, there isn’t really a rigid format, it’s more trial and error and usually, it’s expected that soldiers will be lost. When I was driving to ‘Black sites’ (high mortality rate), I tended to think of myself as the expendable in the chain of command… and there’s nothing I could do about it. Imagining myself as pieces on the battlefield is an easy thought, but to be compared to a pawn is another step, and the final vision was how to elaborate on all that subject matter into one piece.”

As a Camphill alum, a veteran, and a graduate from a prestigious institution, Julius now owns his own business, Julius Cavira Fine Art INC, which houses all his interdisciplinary skills. Among other things, he sells his artwork in galleries and creates design work for businesses. His master’s thesis is a graphic novel on the “disconnect between the art world and the people with whom the art was made.” The book is titled “Travelling Troubled Wallflower” and it is set to be published in the coming year. Julius is confident he will never forget his formative experience in Camphill and believes volunteering your time and fully immersing yourself in a noble cause will reward you tenfold in the long run. Commitment and service are pillars of a good society, and among many other benefits, tangible and intangible, Camphill provides an opportunity to discover your authentic self and creative potential through connection to the arts, land and people.

To learn more about Camphill and discover what it means to serve, visit https://www.camphill.org/about/

We use cookies to ensure that we give you the best experience on our website. If you continue to use this site we will assume that you are happy with it.Ok